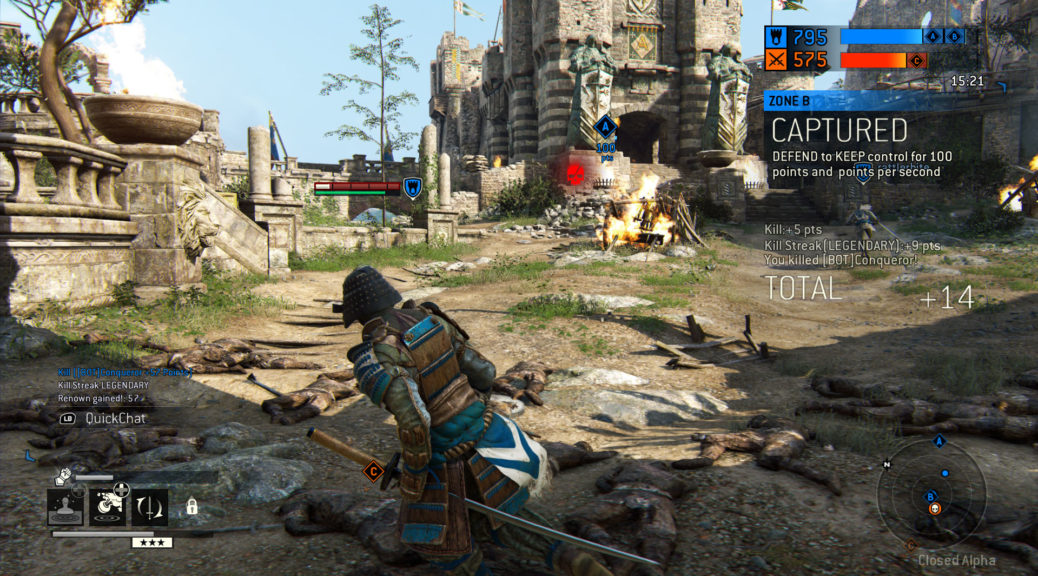 I was lucky enough to get into the For Honor closed alpha, and decided to stream a little of my first dive in… I quickly forget the basic that the CTRL mode is block and keep trying to remember if there was a special block key for the first few matches.

Anyhow, here’s a few highlights from the broadcast (the featured pic here is from one of those broadcasts which is why it is of lower quality than a pure screenshot, I’ll likely replace that with a straight screenshot later):

I don’t think I’m ready for a VS player mode yet, and will stick to the VS AI modes… lol.

Not shown in those is hero customization, requiting new heroes and adding goals to gain more in game money.

Anyhow, what do I think? It is an Alpha, there are a few hiccups here and there, not shown was my first attempt at a match where it desynced and then disconnected, but it was fairly smooth after that. I did play after those videos with a cheap XBox Controller knockoff (Rock Candy Wired Controller for Xbox 360), and it is a bit easier, at least for me, than keyboard and mouse which is what I used during the recording. The game seemed pretty enough and smooth enough. It’s a game that I’ve been fairly excited about, so getting into the closed alpha was a thrill… and I’ll probably want a moment to sit back and analyze it more fully before making a final judgement, but so far I’m enjoying it. If I were to pre-order (don’t pre-order games folks) then I’d probably get the For Honor standard edition for $59.99 as I don’t know if the features of the Deluxe edition are worth the extra $10 to me… and I don’t see the game worth the Gold edition’s price of $99.99 just to get the season pass… then again, while excited about the game, I haven’t followed enough to know what will and won’t be in the season pass. I’m certainly going to be taking a break from my near constant Elite Dangerous playing to play this more this weekend during the closed alpha period and see if it continues to live up to my expectations as it has so far, or if it wears thin… right now the only thing I see on the negative side is the limited modes/maps in the closed alpha, but so long as the game itself will have more, then I’m fine with it for this weekend as it is. I’ll try to update this post after the weekend is over with some more final thoughts of the game.