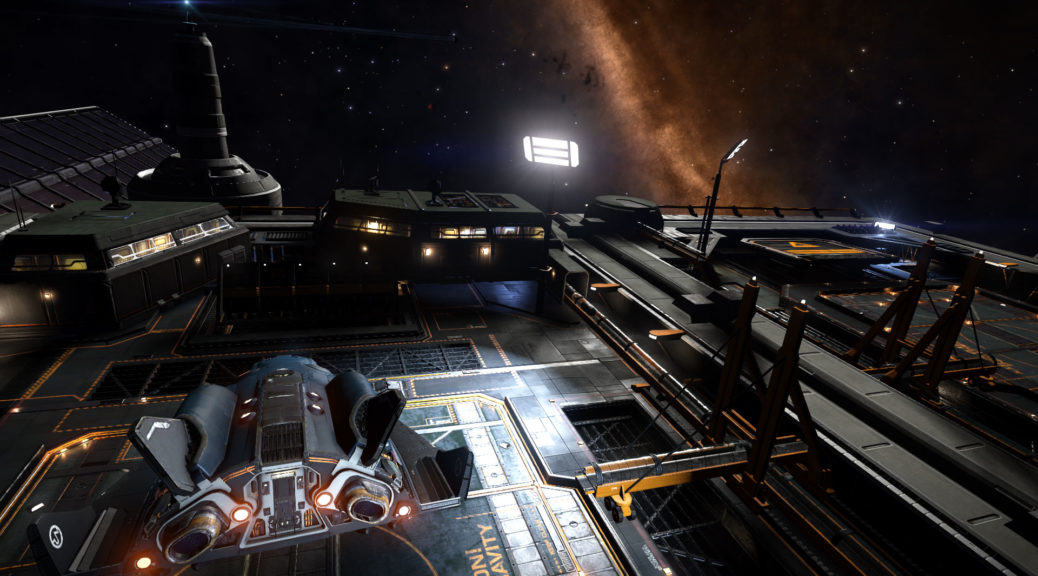 So I’ve given up almost all my other games (save For Honor which I discussed the other day) in pursuit of many hours of Elite Dangerous. I’ve had ED (Elite Dangerous people… come on… grow up..) since early alpha… I dropped a lot to get into the Alpha back when… I want to say 2014. Then I stopped playing for a while… I picked up Planet Coaster by the same developers, but still didn’t jump back in.

Then No Man’s Sky happened. A game that I still don’t own, but did get to play some. The mild disappointment in that got me back into ED and I upgraded to the Horizons expansion have been playing near daily since. I most do transport… I’ll pickup a mission, then fly some cargo along with it to help make a few extra bucks. To be clear, there is near no similarity in No Man’s Sky and Elite Dangerous aside from they take in space.

For those who don’t know, Elite Dangerous is a open sandbox, MMO(ish), in space. You get a ship, then from there, you are free to do whatever you want to do. The game won’t hold your hand and guide you, and you can, and likely will, fall into some bad guys who’ll want to blow you and your ship to smithereens… and if they do, then all the data you had, and any cargo you had are lost. You can get your ship back if you have enough to cover the insurance on it. Many, if not most, space stations have a Missions Board where you can pickup missions that may or may not be legal, and will earn various amounts of reputation and in game credit, which you use to buy better ships and upgrades for your ship. The really cool part is, that it is modeled on the our own galaxy. Hundreds of thousands of stars, nebula’s, black holes and more are right where they are in real life in relation to our solar system, and those that we don’t know for sure, are procedural generated. Humanity has only expanded so far from Earth’s system, and beyond “the bubble” as they call that zone, is a large vast galaxy to explore. You find a system before anyone else, and can get that information back to human controlled space, you get to have your name attached to it for everyone else to see.

You can play the game solo, private group (with a more tightly controlled group of players) or open with lots of other players. As the game is a full open sandbox, this means in open mode there is PvP and griefers. I tend to play solo or a PvE group as I want to play the game.

Anyhow, I’ve done a couple broadcasts of it lately, so here are a few highlights of some of them.

Let’s See Felicity Farseer – My First Engineer Visit. I didn’t get to unlock her this visit as I didn’t have the 1 unit of Meta Alloys, but I did travel a rather long way to see her… This is part of the Horizons expansions… Engineers, NPCs that will sell special upgrades to your ship’s systems. I did shortly after that broadcast unlock her by visiting a system to get Meta Alloys, which is why I got to see…

My First Black Hole – Maia B – Elite Dangerous. I explore my first black hole in Elite Dangerous in the Maia system. It has a fairly neat Gravitational Lensing effect… as I note in the video the mass of the black hole, distorts light as it goes past (I say by gravity being bent, but I meant gravity itself bending light). A far better description of Gravitational Lensing than my off the cuff memory while streaming is available here: https://en.wikipedia.org/wiki/Gravitational_lens.

I’ll be streaming it more and I might add a few more highlights. I’ve been playing it a lot lately, just don’t stream it each time… something I know I need to do more.

Also note that I keep mentioning humanity and their bubble… well, the game has been dropping lots of hints of late that an alien race is about to appear soon. The Thargoids were in the original Elite game ages ago, so most people think it is them.