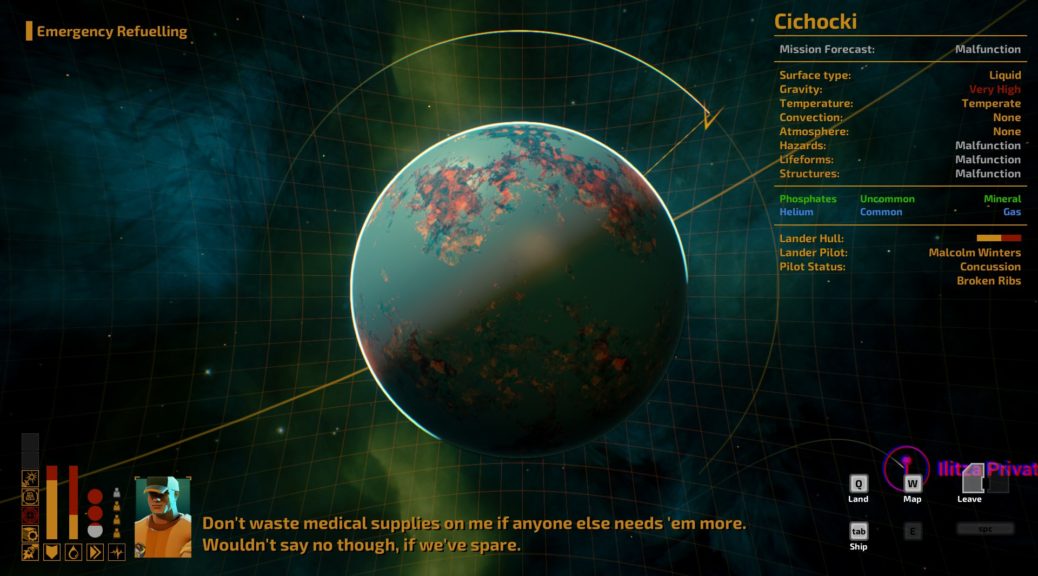 So I managed to get a preview copy of The Long Journey Home (Steam Page) from the developers, and I got to say I’m beyond glad I did. I’ve fully enjoyed my time in the game, and I’ve barely made much progress on the journey home yet. The game is basically a rouge like, space exploration game along the lines of FTL, but a different art style, and what seems far more depth than what I at least got out of FTL. It also adds a bit of the old Atari Lunar Lander arcade game thrown in for good measure. Add to all this a good narrative and you end up with a fun new game.

Odds are it will take several runs to make the journey home. Each time you have to restart from scratch, but you keep your knowledge each run. The basic story of the game is that you were on the first jump capable ship, on your way to Alpha Centauri, when your jump drive malfunctions and sends you far from home. Now you are on your journey home. You’ll have to upgrade your ship and lander, and meet aliens, and work your way home.

You start the game picking 4 crew members from the list. This list is set the same each time. They each have their own specialty and something they have brought with them, generally a one time use item, which I learned the hard way after using the medical kit. You will want to pick a diverse set of skills to aid your journey. If one crew doesn’t work, try another.

Next you pick a ship. As of the build I used, which while it is a beta/preview build, is content complete, is three ships. One ship may have more cargo room, but lose some jump range, while another may have good jump range, but poor fuel space. It is a question of balance and what do you want for a particular run. Some space stations offer a ship yard, so you can upgrade as you go along, and I’d guess it would become necessary after some time.

The same applies to the next pick, which is a lander. While I don’t recall seeing any landers or upgrades in a station, I’d have to assume upgrades or new landers become available. Even Average gravity planets can be a challenge to land on, and anything above that, at least with the starting lander will result in pain. When landing, you need to consider the planet you are landing on, and its conditions. The game gives you the details you need to know. It’ll tell you what is possible down there, and how dangerous the planet is beyond just gravity. There may be high winds, there may be lava, and there could be a host of other issues that make landing difficult, and possibly deadly. As it took me a moment, the minimap while in the lander shows the full surface, so going past the edge on the minimap means it wraps around the other side of the minimap.

Finally you pick a seed to start your run, and then pick a style of game. There is Adventure Mode, which I’ve played so far, then Rogue mode which is the more intended version of the game and cranks things up a few notches to truly test your wits and abilities. I haven’t repeated a run using the same seed yet, but with perhaps a slightly different crew to see if I’m better able to make a better run.

The preview guide strongly suggested using a controller, but for myself, I found keyboard and mouse to be far better, especially for parking in orbit around planets. Your mileage may vary though of course. It may also be that I have a cheap Rock Candy XBox 360 controller, and don’t have an XBox One controller hooked up to it, or a PS4 one hooked up.

While flying your ship, you will see the gravity wells of planets, moons, asteroids, stations and the like, and these gravity wells will effect your ship’s path through a given system. And you need to explore systems to gain fuel for your ship, fuel for your jump drives, and items to trade and sell with the various aliens in the game. I don’t know how many various aliens there are in the game at this point, but have ran into a few. You’ll be intercepted by some, other you can intercept and hail. Interactions with the various races will have an effect on your run… I’m not sure if you become hostile in one run, if they remain hostile in another. You can also gather fuel by flying close to some stars (perhaps all?) and fuel scoop like Elite Dangerous, but it is a much harder task to pull off than in ED.

On the ship are a variety of rooms. A lander bay, the bridge, crew quarters where you can assign rolls (and this may be the first place to visit on a run to pick who should pilot the lander) and see what they have to say. There’s also a Lab, where they can interact with the items you find or they brought along. Select an item, and orange around them means they can do something with it. The Resources room allows you to turn the resources you gather either via the lander, mining, or trade, to use on your ship. Some items heal damage to your ship and lander’s haul. Others might refuel the ship (the lander seems to refuel automatically on returning so long as there’s fuel on the ship, but doesn’t seem to use any up), while another might give you the ability to refuel the jump drive. Resource management would become a thing later on in the game from the looks of things.

One side note, I was in the Lander Bay once, and one of my items was red. I clicked that item and it disappeared. I had hoped it would give me the option to repair it, but seems that clicking it dismantled it from my lander, and did so without warning. This was my only real annoyance with the game so far. I’ve read on the Steam Community pages of others having misadventures with misclicks that lead to disastrous results without the game asking if you are sure you wanted to do it. Hopefully this is one of the things coming in a fix before final release, zero day, or soon after anyhow.

These aliens may send you on a variety of missions, and it’ll be up to you to decide if you want to take it or not. The guide warns they may send you to attack another ship, well before you are ready. I personally ran into one that wanted to give me something, but it seemed they wanted me to commit to being a slave. Another run had me borrow money, but then I owed them two hundred more credits, without knowing when that bill would become due. I died before that finished.

Anyhow, I’ve enjoyed the heck out of it, and will be really sad if the code expires on the 30th when the game comes out… if it does, then I know where payday money will go. I’m not sure what the price is schedule to be. Off hand I’d guess $20-40 would be fair… hopefully closer to the $20 range for my pocket book. 🙂 Seriously though, I think the game is a steal at $20-25, if it got close to $40, I’d have to think about it. That again is based on my own, very thin pocket book. So far though, I’d have to say it is one of my favorite rouge like games, and may well be number one at that slot, we’ll see how it goes after I make it a bit further into the game. My 13 year old son tried it, and seemed to enjoy it, though he ended up half joking searching for “how not to suck at the long journey home”. Like FTL, you’ll likely die several times before you actually get the hang of basic things. I’d say it wasn’t as frustrating as Dungeon of the Endless (which I also love… basically most of the Endless games I love). For me, I’d say I enjoyed it far more than FTL, and I had far more luck with it than Dungeon of the Endless. If they can fix those misclick issues I talked about before, I’d have no problems recommending it at all for any fans of space rogue like games… even with that minor annoyance, I got to say it is a fun time. That said, if it is above $25, then perhaps wait on a sale, unless you see from streams and the like that it is a must have for your personal collection.