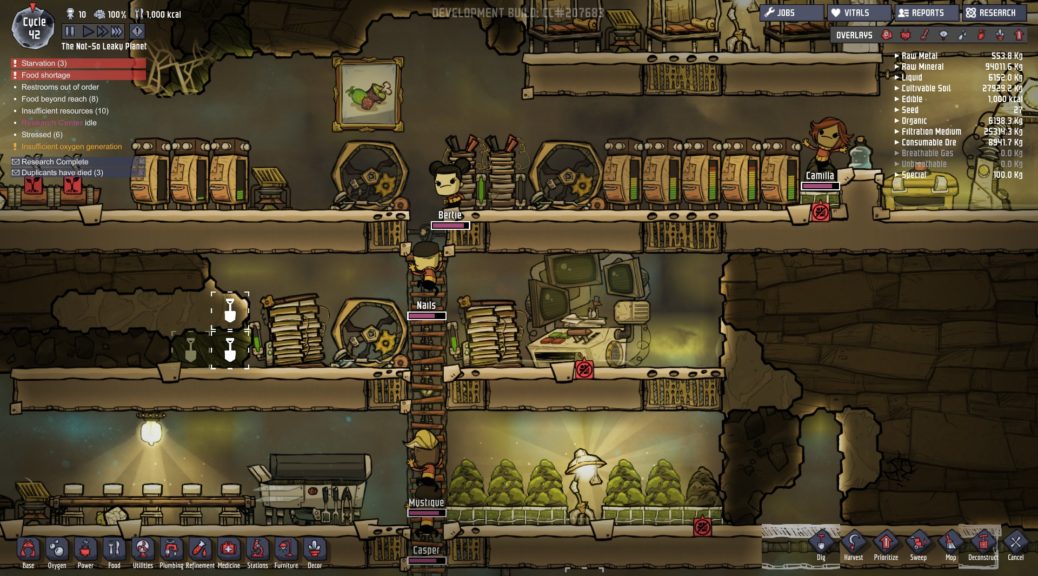 You know you are in trouble when you’ve played a game for a couple or few hours after work and now it is a bit after 10 PM and you decide you’ll stop in a minute so you can wrap things up for the night and get ready for work early the next morning, then the next thing you know it is midnight (if not near 1 AM) at now you are going to have just a few hours of sleep, and you are going to regret it in the morning. Such a game is Oxygen Not Included, the newest title from Klei, perhaps most well-known for their Don’t Starve series. The game is coming soon to Steam Early Access (you can get super early access via this Oxygen Not Included thread for $19.99 USD, and price is expected to go higher later, though they haven’t set a price yet).

Oxygen Not Included is a space colony simulator, similar to Rimworld and a couple of others, but with a fun cartoon art style from a 2D platformer perspective. It is early Alpha stage at this point, early even for Steam Early Access (which is why the normal Steam page doesn’t include a way to buy it), but is very playable, and a bit overly addictive. I’ve managed to avoid playing too much the last two nights… never mind that I was out-of-town away from my computer one night and busy with chores the other…

The premise is fairly simple, you manage a growing colony of colonist, duplicants (clones of some type), that materialized in the middle of an asteroid. You need to help them survive and thrive as many days and night cycles as you can. When you first arrive, there are a couple helpful rocks nearby that generate oxygen, but they have a very short limited life span, and you need to start digging your way out of the small oxygen pocket you have and find the essentials to life, water, a way of generating oxygen, food, build toilets, build power generation systems and lots more. As the cycles increases, you gain more and more duplicants. Each duplicant has their own unique stats, some can’t dig, some eat more than others, some can’t research new tech, some may vomit when stressed, some may destroy equipment when stressed. The game gives you the ability to pick which duplicant you want from a list of 3 (the first time you get three choices period, but can refresh each until you find a good starting set), allowing you some degree of what sort of stats you want/need at that stage of the base’s development. You can rename the colonist too, which is a popular feature for Twitch streamers and YouTubers to name them after subscribers/followers.

I’ve found in my first two play throughs that the game is fairly easy until you get near cycle 40, where if you haven’t managed stress, food and water, you’ll start having issues. So keep those three things a priority and at the very least you won’t have a bunch of them dying on you as I did on my first play through, where my duplicants started dying around cycle 50. As of cycle 41 on my second, seems to be the likely outcome again. This time I planted food, but atmospheric pressure is too low for my plants to grow. where the fist time I didn’t start planting early enough. Water is another resource that is highly precious, and becomes harder and harder to find, and at this early stage of the alpha, can’t really be generated. For the limited water use items such as the shower, and lavatory (you start with an outhouse), I’ve learned to build two closed off water tanks and use pumps, one tank has a decent supply of clean water, the other is a contaminated water tank that then gets pumped out, cleaned and put back into the clean water tank. This still means you need to find clean water for your dupicants to use elsewhere though, such as keeping the oxygen generating algae farms going, at least until they add a means to generate water.

The research tree is a bit limited at the moment, generally you’ll go down from top to bottom on the first column, then move to the second column, picking which ones you need (while the game doesn’t make it super clear, you’ll need to build a computer to start the second and third columns of research, though who knows they may add something else that needs built to research third column items or add more columns that need more advanced things). As noted above, the only thing I really want added at the moment is good water generation since it seems in such short supply, and perhaps better ways of making oxygen beyond the algae farms as you run out of algae soon enough and the slime to algae thing doesn’t seem to generate enough (could be I just need to build more of them). Still, this is super early in the alpha stage and the game isn’t available via the normal Steam Early Access yet, and some of these minor quibbles will likely be fixed by the time it actually is on the Steam store without having to jump through the forum link.

There are also a few bugs and performance issues. I haven’t encounter any real bugs (I’ve seen streams where it will crash if the game starts generating frozen CO2), but around cycle 40 when your colony is built big enough with lots going on, it can slow down, or even freeze, off and on for short periods of time. Again, this is early alpha, and is to be expected.

Despite the minor quibbles and occasional performance issues and small bugs, the game is showing incredible promise. Now excuse me, I have to experiment with a pressure door to save my plants and save my colony. I also saw some setup where a guy had a room of dead people and the mobs create contaminated oxygen, this is pumped out, cooled to create liquid oxygen, which is pumped to created regular oxygen… and lots of other stuff to see if I can’t expand the lifetime of my colony. Now if I can just stop playing when it is late so I’m not so tired the next day.