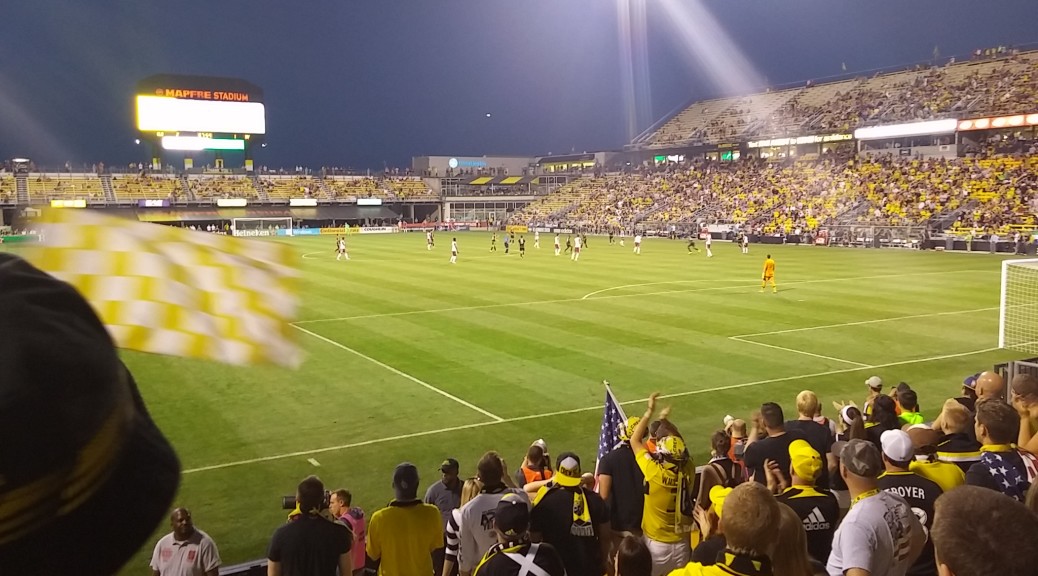 So after spending some time with a loved one, if a bit too little time, I made the three and a half hour trek to Mapfre stadium…

I already knew parking was going to be a ridiculous $15… yeah, cheap compared to what one pays in Cleveland, but still… Anyhow I park myself in a spot I hoped I’d be able to get out of easy enough after the game (I still ended up spending half an hour waiting to exit the lot) and now the excitement is real. After some searching I finally find the tailgate where the guy who gave the tickets away is hanging out at. I thank him, and hang out in the area a bit. I grab a burger from one of the tailgates there and have a good time. I normally don’t drink (I have a beer or two a year), and considering I’d just driven nearly three and a half hours, I was hungry, and had over a two hour drive home after the game, I decide not to grab a brew from the tailgate. I did see Frankie Hejduk, but didn’t get a selfie with him, though I’m sure he’d have been more than willing. I sadly didn’t get any pics while in the tailgate…

Social awkwardness, shyness and the like take over, plus the excitement to get in and see the stadium, so I leave the tailgate and make my way in. I get in, check out the signs, and the side shop, but decide to go into the main gift shop. One t-shirt and some stickers later, I pass the stage where the music I’ve been hearing since I arrived in the parking lot is coming from… however the band is just finishing up. I don’t know who they were, and didn’t actually listen while in the parking lot or anything else to tell anything about them. Lol. I dash inside the restrooms to make a change of shirts so I can show my support properly. (Side note, I had stopped at a Walmart in Columbus on the way in, and they didn’t have any Columbus Crew shirts, which I had hopped to see, figured it’d save some money off the inside shop price.)

There are no signs leading you to the Nordeke that I saw, but I figured my way there easily enough, and soon I’m standing on top of it and ready to enter the madhouse… (the pic of the sign is from after the game, so slightly out of order, but it fits here) After some confusion on where my seat puts me, somebody lets me know there is no assigned seating and I can sit wherever I want. A couple shots of my view (one is from halftime): The game starts before I realize it, and soon the New York Red Bulls take a 0 – 1 lead over our Crew. Never fear though, as the section remains full of excitement and then gets a reason to celebrate as the Crew draws the score even. The black and gold streamers pop, the smoke fills the air and the section goes crazy. I don’t know all the chants, and even by the end of the night I still don’t know most of them… but I’m able to join in a few, and at the least can clap my hands with the group… heck I’m pretty sure some of the people around me didn’t know the chants either and just mumbled stuff in tune with what was actually being said…

Halftime comes up and I’m glad I came, we finally get a moment to sit after standing for 45 minutes. There’s been some questionable officiating during the match so far, and would continue. A bit on both sides, but from my not as well educated on the sport point of view it seemed to come against Columbus more often than not, or calls missed that should have been called… but I’m not a super football/soccer fan, and it’s a bit harder to pay attention when live at the end of the field than on TV where you gain the advantage of the commentator helping to educate you on what’s going on. The second half kicks off and eventually the Crew gets another goal, the section once again goes super crazy.

The Columbus Crew manage to hold their lead and in the end, with a score of 2 to 1, the Columbus Crew wins, and gets 3 points… okay a side note of explanation for those who don’t know the game. When a match ends, the winning team gets 3 points for their season’s total points. If there is a tie, each team gets 1. And losing teams get zero. At the end of the season, it is these points that matter, and in the event of ties they go to goal differential and a few other methods of deciding who’s ahead when the points are even up. Here in the US, this leads to who is in the playoffs and so on, in much of the rest of the world this leads to promotion and relegation (bottom three teams drop down a league, top three teams from that league move up sort of thing). Anyhow, this win puts Columbus in 2nd place on the MLS East with 24 points (first place DC United has 35). There are two other teams as I write this that have 24 points, the Crew and Orlando tie with a goal differential of 1 and the Crew pulling ahead with Goals For (that is they scored 27 goals and gave up 26, while 3rd place Orlando scored 23 and gave up 22, each gives a goal differential of 1, but the Crew’s 27 goals for give them a slight lead against Orlando). After things settle down a bit, the fireworks start… I’ve got a camera phone, so excuse the quality… During the fireworks, some of the ash rained down on me… The fireworks were pretty decent, especially for a stadium show. With the fireworks over it’s time to leave. Overall I had a really great time. If you get a chance to go, go. I think my kids would have enjoyed it had I taken the kids. There were some kids in the Nordeke, so it’d be okay for them there as well as any other spot I’m sure. They probably wouldn’t enjoy the long two plus hour drive, but the game itself and the stadium they’d enjoy. Same with loved ones.

For professional sports, I’ve been to a few Cleveland Indians games. Not really my thing. Baseball is just long… and lots of down time. For the money and entertainment I prefer to see minor league baseball… and even then… I have seen the Canton-Akron Indians when they played at Thurman Munson Memorial Stadium a couple times, but haven’t seen them since they moved to Akron and got renamed. I’ve never seen a Browns game, and given how cold it usually is, probably wouldn’t want to, unless every aspect was free. I’ve never been to a Cavs game, and again probably not my thing as Basketball isn’t really my sport of choice… I mean if everything was free, I’d probably go, but I doubt I’d pay even parking for a Cavs or Browns game… I have been wanting to watch a Columbus Blue Jackets game, that’s their professional Hockey team. I am fairly uneducated in Hockey, but I’d still like to go… Anyhow, the Crew will probably remain my sport team to go watch when I can.