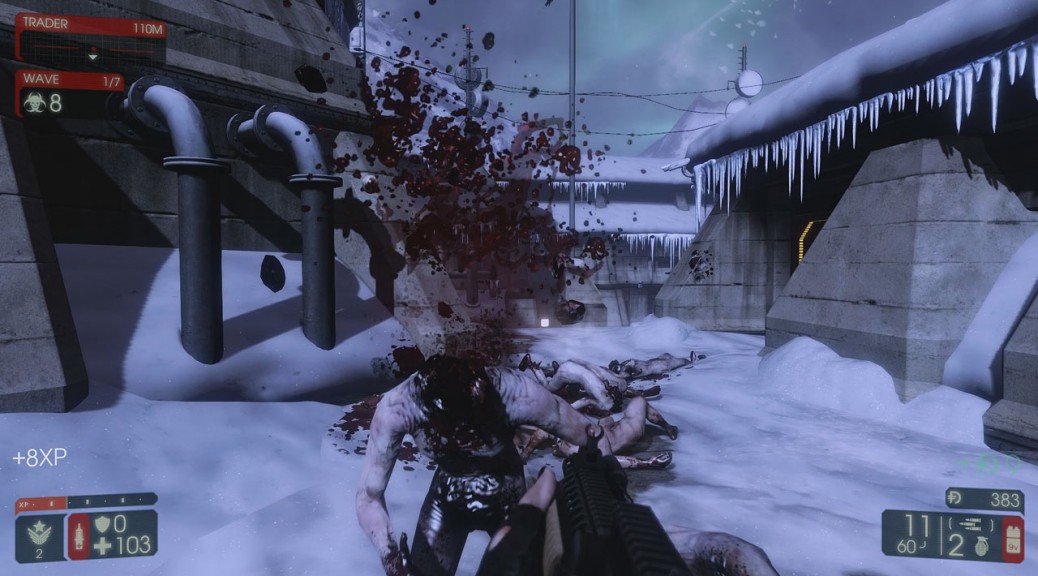 So I manged to get into the Killing Floor 2 Stress Test Beta (I don’t think my Dear Tripwire, Why I Want In the Killing Floor 2 Beta post helped, but it might have), and I had a blast. Seriously some of the most fun I’ve had in awhile playing a game. Tripwire Interactive has a solid hit to be on their hands.

Let’s step back a moment for those who don’t follow the latest and greatest in gaming. What is Killing Floor 2?

Well, one can safely assume it’s a squeal to Killing Floor, a game I have to admit I didn’t play. I wasn’t even following the development of it much at all until shortly before the stress test beta launched and I saw the game and I was interested, then the beta launched and I HAD to get in.  Anyhow, it is a co-op horde shooter. Co-op in that all the players are playing to a common goal. A horde shooter is where wave after wave of enemies come at the player(s) while they try to survive. Most horde shooters ramp up the difficulty/number of enemies depending on the number of players in a given session. Generally the hordes are zombies. The most common example given that is more generally well known is Left 4 Dead 2, the main difference is that in Left 4 Dead you are making your way from A to B, then another mission from B to C and so on through the game. Killing Floor 2 on the other hand plays full out on one map (well, several maps in the game, but each session is on one map) fighting off a number of hordes of zombies, or Zeds in Killing Floor speak. Another example is Zombies Monsters Robots, where you fight off hordes of those three, dinosaurs and more… (I’ve made a few videos of my ZMR play). Basically the average length game will have 7 rounds (the number of rounds depends on the game session length), each round will have more and more Zeds (the number of Zeds go up each round, and the exact number depends on how many players are in the game), and more difficult Zeds come out on later rounds. After clearing all 7 rounds, you face the boss. During the stress test beta there was only one boss, but there will be several bosses that the game will pick from when the game finally releases. This will keep things fresh.

So as I was saying I got into the beta and got to play a bit… not nearly as much as I’d like to have. Between work, real life, watching Twitch, YouTube, Netflix (Daredevil is the bomb by the way), Crunchroll and everything, I didn’t play nearly enough. However, I did manage to record one live commentary video which is a basic introduction to the game and does an okay job of showing it off…

As one can perhaps see. I’m not great at the game… I’m not great at most games really, LOL. But I had a blast playing the game. It is seriously on my list of best games of 2015 already (the only other real contender at the moment is the PC version of GTA V, with a few games that may/should come out later as other contenders). Especially if you get in with some friends and can use Teamspeak, Dolby Axon, Curse Voice, or some other voice client… the game provides a great deal of entertainment value. While the game was/is early beta, I experienced very few bugs, and only one was worth noting on their forums (a bug lots of games get, which is related more to my nVidia drivers than the games themselves wherein a game will try to use a much higher resolution than my monitor supports,then the card down scales the image to fit my screen, but this creates issues on my system). I was just beginning to get the hang of the game near the end of the time I had to test it.

The game itself will be out on Steam Early Access on 21 April 2015… Now it’s important to note. This is Early Access and not a final product, it’s basically a beta of sorts. As of the stress test beta, and presumably at the earliest stages of Early Access, there are only 4 perks (classes), and only 3 maps… I want to say there is supposed to be 10 perks by launch, and a rather good number of maps. Probably will only be the one boss still too at EA launch. As Early Access goes on, more and more content will come down. When the game is done well enough, they will launch on Windows, Linux and PS4 (no XBox One announced yet), but there is no date as yet for any of that. The price should be $29.99 (US), ₤19.99 (UK) and €26.99 (EU), and a Digital Deluxe version that includes an extra playable character, several cosmetics, the soundtrack, a digital art book (over 200 pages) and the original Killing Floor game (as I write this, that alone is $19.99 USD) for $39.99 (US), £26.99 (UK), €36.99 (EU)… so basically for $10 USD more, you get a $20 game, a bunch of DLC that’d cost who knows how much, a soundtrack and digital are book…  so it’s one of the few times a deluxe version is actually worth the extra money up front (unless you already have the original Killing Floor, in which case one needs to weigh the other extras). EDIT: A fuller list of prices and the 6-pack prices are listed on this forum post.

If you are wanting a finished product, then like most Early Access titles, I suggest holding off. This isn’t Early Access of a complete product using EA as a marketing gimmick, lots of content is still coming. In this case the game isn’t likely to go up in price on release, so the only real advantage is being in on the game early, seeing the new levels, Zeds, characters, and bosses as they get released. I think the game will have a long life after release. This is improved with the modification tool set that’s being released as well, so there will be community made maps and content that will also help keep the game going for a long time. Not to mention the fact that Tripwire is committed to adding maps and content to the game for a long time as well. All content essential to the game, such as maps, will be released free, leaving a few mostly cosmetic type items, select playable characters, etc for paid DLC.

Watch that video, check out some others… then if you think you have any interest at all, then I urge you to get the game. It’s a great deal of fun, and I think well worth the price given what most titles are going for these days.