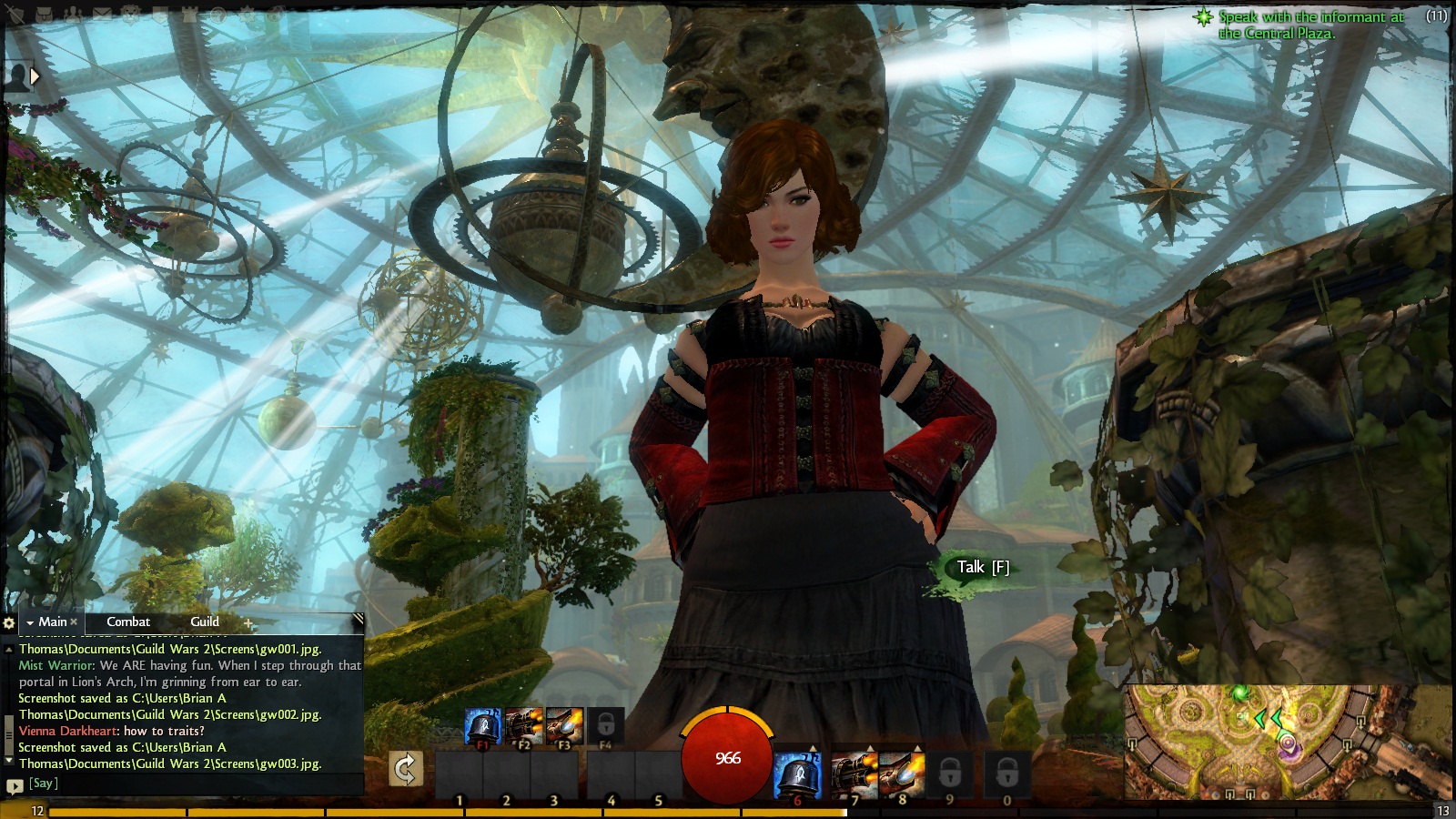 As I write this, the Guild Wars 2 2nd Beta Weekend Event is nearly drawing to a close. The developers at ArenaNet have a hit on their hands. Seriously I am starting to have a major crush on this game and foresee it being a major point of fun in my life… far more than World of Warcraft ever got, and even more than Star Wars: The Old Republic got to. I may have waxed nostalgic about it a bit so far, but I may indeed do more… far more.

This isn’t to say the game is 100% perfect by any means. There are a few outstanding issues I would like to see fixed before launch, but launch soon please guys…

I managed to get some World Vs World time in. Not as much as I would have liked, but I did get some time. This brings me to my first major issue. Even though as soon as you enter the area, there is a guy who can sort of give you instructions, but they aren’t detailed enough, or at least doesn’t give the info that would be good to know.

I did not get to do any PvP outside of the few WvW things.

I didn’t play nearly as much as I would have liked this weekend. I really wanted to get to level 15 or even 20 at the very least. Hopefully they won’t wipe our characters before the next Beta Weekend Event (no date/times announced yet as I write this, they likely won’t announce anything for a few weeks as they poor over the forum posts and feedback from the game itself).

I did get to take some screenshots, one is included as the featured image to this post, and I took some video with live commentary that I might post to YouTube… the video turned out okay until I exported it where it came a bit fuzzy… and after I praised how good it looked at one point in the video…

Small aside. When working with video in Adobe Premier Pro, one needs to remember to scale the video to frame size otherwise you crop the sides off and you zoom in too close as seen below:

I recorded a Let’s Play of Guild Wars 2… partly to experiment with settings and stuff for Ari’s Let’s Play videos, partly to play with Adobe Premier Pro and partly to kill time.

I did a few full recordings that failed before I finally decided to attempt short tests. I had issues with the audio mostly, trying to make the live commentary audible. I probably could have recorded again as I was a few minutes into the recorded when I noticed that the skirt of the character was wearing during the city tour was a little short and she flashed her panties whenever I moved the camera down to look up and view the city’s upper areas…so a quick wardrobe change and she continued with her tour of the city. 🙂 From a roll play perspective I don’t know as if she would have cared anyhow so long as nobody was pervy about it, but for a tour where there is lots of looking up (and no first person perspective yet to do so) I figured modesty may be the better route… also we were about to head into an area where she would need her armor anyhow… as to why I and men in general play women characters, well that is a rather long subject…

Anyhow back on subject…

Another semi-negative. As the world is so large and fairly undirected, it is easy to find yourself going the wrong way to the next proper quest zone. For example, my human character needed some level 10 questing areas, and I thought I had to go through a cave (the cave was level 4 or 5 most of the way until the exit where it turned into level 8). The cave wasn’t the problem, the problem came outside the gave was a whole ton of level 8 bandits and they would all pull making exit impossible. Turns out the way to that area wasn’t through the cave (though one could use it), but through a fort that I had already done. The fog of war on the map perhaps should have lifted just a tad more than it did while in that fort… then again it probably would have been fairly obvious had I really looked at the map well even with the fog of war on… I was just so set on thinking the cave was the way though to the area I never gave the map a fair chance… so… Anyhow, it is still easy to get into areas that you can get yourself into trouble fairly easy… this isn’t unique to GW2 though, as it happens with many MMOs if like me you like to explore.

The game may not be everyone’s cup of tea, as demonstrated by the few negative reactions out there… of course some of those negative reactions are based off issues that the beta is meant to address… which is a problem for the developers as the term beta has become a marketing gimmick of late where it is more of a demo then a true beta so people don’t always understand what is going on and why some things aren’t working yet… yes you paid good money to play the game, but hey the game isn’t out yet, not close, beta isn’t a demo, it is a test of things they need to fix before they release… anyhow, some others just don’t care for how the game plays out, and for them I guess they’ll have to keep searching or return to the MMO they feel is better. As for me and my house we’ll be playing Guild Wars 2…. well I will anyhow…

I personally didn’t run into much of any show stopper big Beta bugs. I thin realistically they could move to testing GPU optimizations and the like next beta test event and if all goes well release a month or two after that… well, unless they are going to do more with WvW to make it easier for beginners as that may take up more time on its own. Also they may test Asura and Sylvari, which may take a weekend event itself…though really they could either save them for release or for the last BWE. I figure at least two big Beta Weekend Events if they continue the one a month that they have somewhat done so far, and perhaps one or two stress test like things here and there before they announce a release date, at which point they may do one last BWE just to celebrate… That should make for a September or more likely November/December release date. Too far for me unless they start giving us more events each month just to help tide us over. 🙂

I didn’t research more, didn’t read the novels yet, didn’t play much of any of the original Guild Wars as I said I wanted to do in one of my older posts.

You need to get yourself Guild Wars 2 and meet me in game… or just enjoy yourself on your own time.