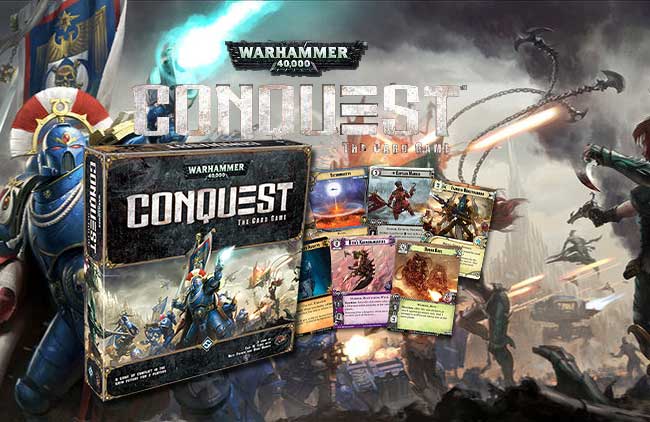 I’ve previously mentioned that Fantasy Flight Games has a new Living Card Game (LCG) coming out called Warhammer 40,000: Conquest. Needless to say I’m pretty excited about it… Perhaps not as overly geeked out as I am over Imperial Assault (see previous story), but it was one of the games I was most excited for prior to GenCon (since then Abyss has slid down a bit and Five Tribes has moved up to just below Conquest and Imperial Assault for the post GenCon stuff). Anyhow, I can’t wait for it to come out.

Sadly, I don’t have a play group to play it with. I’m sure plenty of people at the Boardgamers of Greater Akron will be playing it, but it is a bit of a drive to Akron from where I am, and I don’t know anyone local who’s into LCGs. So being able to play the game over the Internet is always a sweet deal. Sure one could use Skype and just put the webcam on the table, but that requires a playlist of people to play with a much larger table than my desk, and a few other complications. Lucky for us, there are methods of playing LCGs, TCGs, CCGs, and other games over the Internet. For card games the two main platforms seem to be OCTGN and LackyCCG. This post will focus on the OCTGN plugin, but I know there is development ongoing for a LackyCCG plugin as well (by another person than the one who did the Conquest one). OCTGN is presently Windows only (though they mention they would like to do a Mac version and touch screen version eventually), while LackyCCG is multiplatform including Windows, Mac, Linux and iPad.

Before we continue, let me note that I am in no way involved with this project, either the LCG itself (although, FFG, if you want me…lol), OCTGN or the plugin being discussed below.

So what do you need? END_OF_DOCUMENT_TOKEN_TO_BE_REPLACED