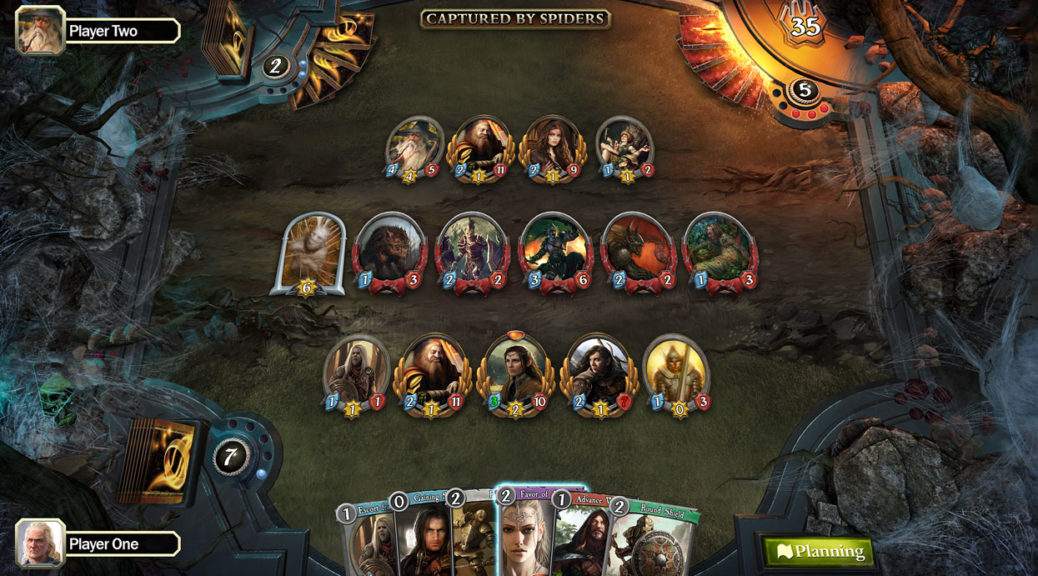 I love games. A casual look at this blog would probably make that obvious. I don’t talk about tabletop games too often, but I really do enjoy them. My favorites are co-op games where all players are working toward the same goal, and I can even appreciate hidden traitors in my co-op. When I play video games, I prefer Player vs Environment (PvE) over Player vs Player (PvP), and again, if co-op is in there, all the better.

Fantasy Flight Games has a few good co-op tabletop games, chief among them are a couple of Living Card Games. In Living Card Games, they function like the familiar Collectable Card Games such as Magic the Gathering, Pokemon and many others, but all booster packs have the same cards, so there is no chasing card. While I love Netrunner, it is the co-ops that I truly love. Arkham Horror: The Card Game is amazing, and captures the spirit of the great Fantasy Flight Arkham Chronicles. Then, of course, there is their long-standing The Lord of the Rings: The Card Game, a game that has stood the test of time as an amazing co-op/solo game experience, rich in depth and story.

Into this world comes a new game from a new division of Fantasy Flight, Fantasy Flight Interactive, and their first title The Lord of the Rings Living Card Game. This game aims to take the core experience, and make a whole new game using the same basics, but in digital form. This has been met with the expected mix of reactions, and to this end let us reflect on them.

There were plenty who hopped it would take the regular game and simply digitize it. To do what some of the gray market stuff, most notably OCTGN and a plugin. However, that method (OCTGN) suffers not only from questionable legality, it is a bit unwieldy, especially for new people, who have to first learn OCTGN, then the plugin. So the hope was that they would take the whole desktop experience and do a full and proper from the ground up port of the tabletop game and simply digitize it, removing the legality question and simplifying the learning curve. This isn’t what we got, and this upset a certain segment. During one of their Twitch streams, they discussed this and noted that they thought it could be too complex to really make in digital form (I believe they said desktop, though I personally think a proper PC/Mac would have been okay there, but tablets wouldn’t have been able to do it properly and we can be sure a table form is coming). It can get a bit out of control, so porting it to a pure digital desktop experience could have been difficult.

I think the biggest problem had they gone that route, is the fear that many have, which is that Fantasy Flight will make so much with this, that they’ll drop the physical tabletop game. Fantasy Flight made it fairly clear though that these are different teams, though there may be some overlap to keep some things consistent, for the most part, they are separate teams. Also, it appears the tabletop game is still doing well, they just announced a new cycle, so I think we’ll be keeping it going for some time. Had the digital version been a replication of the tabletop experience, and it cannibalized sales of the physical game, then there would be justified fears of them abandoning the tabletop. As this is a whole different experience, I think it helps improve the viability of the physical game. Players of the digital game may decide to try to see just how different the physical game is… and I’d have to guess that is Fantasy Flight’s hope as well.

One of the funnier complaints I see in comments on Twitter and articles is from people complaining there is no competition, no PvP, and so the game will fail because there’s no competition with other players. Of course, the tabletop version has been doing fine since 2011, so six years as I write this and at least another years worth of stuff coming. Not to mention the fact there are plenty of video games that don’t have players fighting other players for domination. In fact, many of the best games are single player and even a few co-op ones. I personally don’t know of any other game in the digital card game genre that offers a pure co-op or solo experience, short of solitaire obviously, but I mean thematic games, where you actually play against the game itself like a regular game. I’m for one beyond excited that we are finally getting a digital card game that isn’t focused on competition with other players, and I know for a fact I’m not alone. One can look at the Game Awards nominations for best game of the year, where four of the five were single player games. Not everyone wants to dominate others, some of us enjoy relaxing with others and working towards a common goal… or flying solo. This is a huge untapped market for people who won’t play Hearthstone or some other digital card game because they don’t like the competition. I mean, if I’m missing a quality digital card game that is pure co-op/solo like this or Hearthstone that I’m not aware of, send me a Tweet (@BrianAThomas), but I think this will be a new trendsetter, and I hope to see more than just the much needed Arkham Horror version, but from other companies who will finally start giving the non-competitive people something of quality to play, much like the single player games that are so amazing in other generes.

Now, I’ve mentioned Hearthstone, and that is sort of the elephant in the room. The art style, the board layout, it all appears to be very “Hearthstony”. I think some would have liked, even if they are simplifying the game from the full tabletop version, to something that can be played mobile, that it would perhaps do more along the lines of Elder Scrolls Legends or something like that. For me, this is sorta mixed feeling for me. I haven’t seen gameplay yet, so I’d hope that at least the background is interactive now that they’ve gone that route. However, I can see the argument to go for a more ESL style on the gameboard. The main menu seems more ESL than Hearthstone (I haven’t played ESL since the beta stages, and haven’t watched many streams of it, I’m going off really loose memories of that here, and they aren’t as ingrained as memories of Hearthstone, which I also haven’t played for a couple years now) and it remains to be seen what the deck building and other elements really look like, and how they function. I’m willing to give it a pass, as I think it fits with what they are trying to do with the game. An ESL style game would have been a different beast and may have been far more complicated to design, develop and make work. Of course, there is also the option to try something new, but again, that complicates things. We’ll see if they stick to this when the inevitable (fingers crossed) Arkham Horror version comes out, or if they try a different format just to see what works best. Point being, I’m going to give them a pass on the Hearthstony aspect.

My one gripe is the single-use Favor Cards. Now if this means once per game, then it goes back into your inventory for use another time, then I’m okay. However, if it is as I fear, a literal one and done, then it is burned from being used in another game, another try, then… then I start having problems. If the game is 100% sound without ever using those cards, and they gain no super high value, then I could be okay with them. It isn’t just the over micro-transaction, potential pay to win aspect (and Fantasy Flight Interactive has to be really careful here and pay super close attention to the massive fallout over EA’s Battlefront II) that has me questioning this move. The big issue with a one and done system is that it goes against the Living Card Game aspect. As I said, if it just drops back into your inventory and you can only use it on your next attempt to play said scenario, or the next scenario or whatever, then I’m a billion times on board with it. I don’t think that would violate the LCG spirit. A one and done though… that does violate what LCG stands for.

Fantasy Flight, Fantasy Flight Interactive, if by some miracle you are reading this, please… please… no one and done cards. Not only does it stink of the whole problems that NBA 2K, the notable mass fallout following EA’s moves, and the like have highlighted of late, but it just goes against everything you’ve been trying to say LCG stands for, for years now.

So there are my initial thoughts on this exciting new announcement. Yeah, I’m nervous about one aspect, but I am overall super excited. The game will be coming to Steam Early Access in the near future. That will cost money, but I believe the game will be free to play once it releases later in 2018. I don’t know how long the Early Access period is expected to last, and when the full free version comes out. I will, however, try to cover it some on my Twitch, YouTube perhaps, here and wherever else once I can.

Side note, in the unlikely event Fantasy Flight Interactive is reading this, let me in sooner than later. I can test, I can keep a secret. I’m in a number of NDAs now. I can do more. I can show it off once the time comes on Twitch… perhaps even finally cut another YouTube video. Perhaps set me up with some codes to give to viewers. This is the whole “you have not because you ask not”, and “it doesn’t hurt to ask” sort of thing. Love you! But I’d love you more of course if I got in early. 🙂

EDIT: I see the Favor Cards do burn forever… so that is beyond troubling. So long as I never feel I need to use it like I could have used a Favor card and would have won. It’ll certainly take actual play experiance to see how I feel about that later.