My dad had given us a gift certificate for the mall, so I used a bit of it at the game kiosk to buy a Go Board. As a bonus, since the holidays are over they have everything discounted so the whole thing came under $20 even with tax. 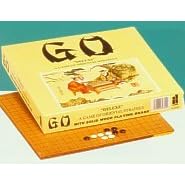 Go Game with Wood Board

That is the board I got.
I review it below the break.

First an overall shot of the board: (The problem is from Graded Go Problems for Beginners, Vol. 3: Intermediate Problems

)
Now a close up with an AA size battery for comparison: (Sorry it’s a bit out of focus, the camera’s batteries died right before I could re-adjust the focus depth… if it can be changed on this camera to keep everything in focus… it’s not like this is a Rolleiflex 6008 AF, a Mamiya ZD, one of those two of which is probably the way to go [or despite it’s shortcomings a Hasselblad H3D, the problem there is it is a fully closed system and other Rolleiflex backs and lenses won’t work with it], at least until the HY6 system comes out…drool) Anyhow…

My overall impression. For $20, it isn’t too bad. It is smaller than a real Go Board, the stones are cheap plastic single convex disks glued together to make double convex stones. The instruction book that comes with the set serves well, though I would still suggest if you don’t know the game to still get Learn to Play Go: A Master’s Guide to the Ultimate Game (Volume I) (Learn to Play Go)

as a better introduction. However, despite the shortcomings, it does well enough for $20 and is a good cheap board to tote around if you don’t want to splurge on a real set and a real travel set (slotted or folding, though magnetic sets are generally not too expensive)… and let’s face it, a real set and stones and bowles aren’t made to be portable (although ChiyoDad had a good idea for a Go Backpack to solve the board part).
Anyhow, it’s good for the money and does well until you are ready to splurge the $115ish to as much more as you want for a quality real set.