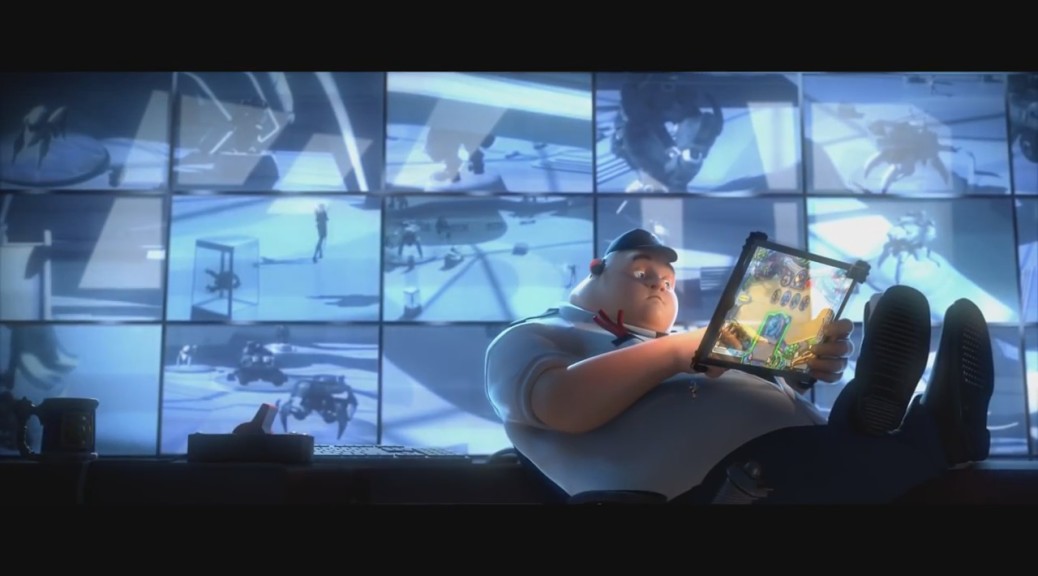 There is a point in the Overwatch Cinematic Trailer (trailer below, screenshot moment as the featured image here) where amidst the battle going on in the museum, it cuts to a scene where we see the security guard playing a game of Hearthstone rather than doing his duty. It is an additional funny moment in the trailer, playing not only off the old joke of security guards not paying attention to that which they are supposed to secure, but also an inside joke at Blizzard‘s other game (for those not in the know, both Overwatch and Hearthstone are Blizzard games).

I am here today to defend the honor of that security guard.

First, here’s the trailer for the few who haven’t seen it yet.

It’s a really well produced trailer that gives us insight into the Overwatch universe (the first original Blizzard universe in a large number of years as Hearthstone is set in the Warcraft universe and Heroes of the Storm pulls from all of them). While it doesn’t show anything about the gameplay itself, it is accessible to all audiences, not just game players. It has a bit of a Pixar style animation, and the story itself is well paced, with likable characters, and doesn’t require knowledge of the game to really enjoy as it is very well self-contained. It’s got plenty of good humor moments, and one of the most well noted among Blizzard fans was the security guard playing Hearthstone, thanks largely to the choice of game. Among people who don’t know Hearthstone, it still fun, because, ha ha, look at the security guard not doing his job and engaging the scene…

In defense of playing games

Let us first get the subject of playing a game out-of-the-way. Now I certainly don’t advocate playing a game while you should be doing work. You should wait for breaks, lunch time, whatever. That said, even prestigious publications as Psychology Today have noted the Cognitive Benefits of Playing Video Games. Mental Floss (okay, not as prestigious or respected as Psychology Today) made, admittedly not cited, note of 15 Surprising Benefits of Playing Video Games. Even TED Talks have covered the benefits of video games. There’s cognitive researcher, Daphne Bavelier’s talk on Your Brain on Video Games. Jane McGonigal has given a couple of TED Talks on the benefits of video games. One on how Gaming Can Make a Better World, and a talk on death-bed wishes and adding 10 years to your life. Gabe Zichermann gave a talk on how playing video games can make kids smarter. Tom Chatfield talked on 7 Ways Video Games Engage the Brain. Outside of TED, AsapScience have a video on Can Video Games Make You Smarter. Of course defending playing video games to a mostly video game playing audience is a moot point, but for those who are outside of the gaming world, this could be news they could use, or news video game playing children may want to give to their parents… Of course I also don’t advocate playing just video games. I encourage roll playing games like Dungeons and Dragons (another one to have positively shown to have great benefits to developing minds, as it improves problem solving, and many more, but I’m not going to link a bunch of those articles as I’m already getting far enough off the subject of the security guard) and modern board gaming as seen in the Tabletop YouTube series. Anyhow, I’m going way off point on the security guard, but clearly playing video games is both personally and socially rewarding. He could be playing with his lover, friend, or a stranger. We don’t know… yes, he’s doing it while he’s on the clock and should be doing his job, but the gaming itself, is very good.

We also have to ignore the fact that all this is going on and there are no alarms going off, which seems to indicate a severe oversight on the museums part. Had the alarm gone off when Winston was knocked through the ceiling, and/or a light started flashing, I’m sure he’d have dropped his game. So let’s give the playing of the game a break. The alarm didn’t start going off until the glass around the glove broke.

Now what could he have done?

Seriously, what could he have done even if he was paying attention? We have Reaper, “an extremely volatile mercenary, a ruthless and remorseless killer” who has “fought in many armed conflicts” who goes unscathed in his battles and leaves empty husks of his enemies. There is also Widowmaker, a “living weapon”, “given extensive training in the covert arts” and “Talon’s most effective assassin”. Both, working together going after Doomfist’s Gauntlet… now we have to presume that Overwatch caught wind of this plan prior to them going to the museum given the way things go down. So we have trained, and very effective killers. Most security guards aren’t well equipped or trained to handle such things, any attempted action would have resulted in Barney Fife (and if you really need that link to know who he is…) levels of competence in dealing with the situation. Heck even a couple of Overwatch’s mighty heroes, the mighty Winston, a “super-intelligent, genetically engineered gorilla” from the flipping Moon, and the much beloved Tracer, who has the “ability to control her own time, allowing her to speed it up and slow it down at will”, had a battle on their hand… to be fair they were also trying to minimize civilian casualties, but this was no cake walk for them.

Given all that, I think it’s pretty clear that expecting him to do anything is absurd. The best he could have done was call the authorities, who would have arrived too late to stop Reaper or Widwomaker from obtaining Doomfist’s Gauntlet. The boys in the trailer wouldn’t have likely been able to do anything either save run like the rest of the people in the museum were it not for Winston and Tracer being there. It would appear at this point in the Overwatch story line (a small aside to those who don’t follow the game, the battles and game itself take place outside of the Overwatch story line) that Overwatch itself had been largely disbanded (due to internal strife in the org and outside), though clearly they’ll need to come back, so the security guard couldn’t call on them. So his options are pretty limited and for the most part, as ineffective as him just sitting there and playing a game.

There’s my quick take on it. What about you? What do you think he could have done?

P.S. I’ve covered Overwatch a couple of times on this site. Soon after they announced the game, and after I signed up for the beta (doing so even before they had time to put the game’s name in place as it still said “Unannounced Blizzard Game” or something along those lines) on Blizzard Reveals Their New Franchise — A New Game I Want In ASAP, and more recently with Overwatch Update 18 October 2015, and I also did a mockup of a giveaway tool that I tried to sell Blizzard on the idea of… well not sell, it was a free idea, though as noted, I wouldn’t have objected had they given me beta access (they did respond to the idea noting they weren’t looking to do any giveaways to the beta at any point but that the mockup was “stellar”). Whenever I get in, I’m sure I’ll do more coverage either here, streaming to my Twitch, making videos for my YouTube channel, and whatever else. And Blizzard… if you are here and want to get me in ASAP… both of the linked articles should have links to one of my profiles. 🙂