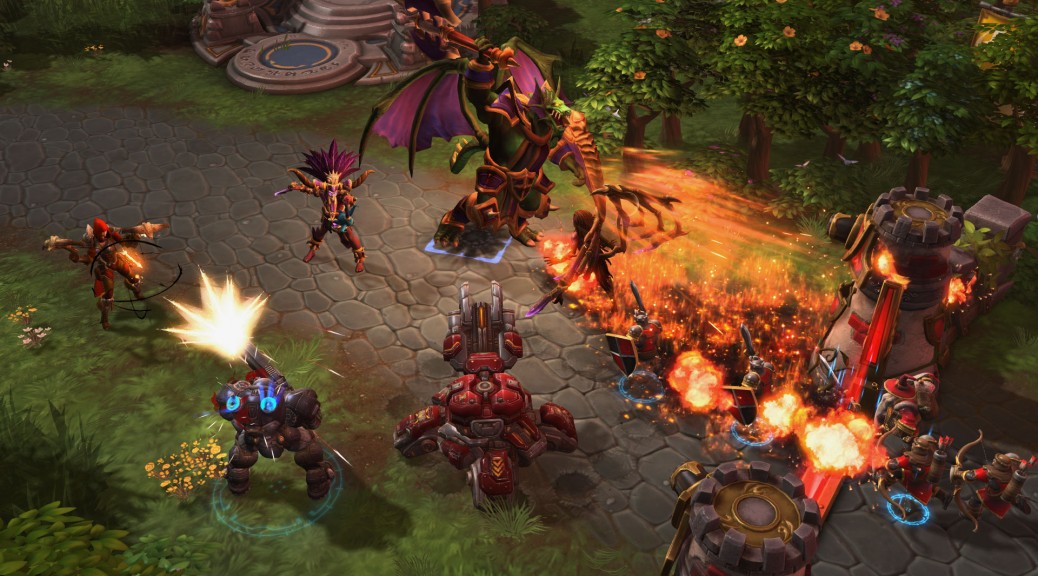 Here’s the thing. The game is very early alpha. Yes, it is perhaps more stable and feature complete then many games that are in beta, but it is still early and Blizzard really isn’t trying to hype the game a lot yet. The same doom and gloom predictions came in the Hearthstone subreddit when Hearthstone was in early beta. They were saying how the ability to sell Hearthstone keys and Blizzard’s way of handing out keys was going to doom the game. As if a subreddit and Twitch community represent the whole of gaming.

People who are in those subreddits this early into a game’s development cycle are already hyped, with no prompting from Blizzard’s marketing teams. Their personal interest in the game may fade as time goes on without being able to get in, but Blizzard knows that the vast majority of those people will be back once the game goes into open beta and release. There hasn’t been much of any news of late, and the user base is too small, so there isn’t many topics to discuss right now, which is why the Heroes subreddit is somewhat quiet… aside from the doom and gloom threads [1], [2], [3]. We can’t really use a subreddit to a game that isn’t even in beta, let alone open beta to decide how well a game is doing or will do. It is way too early.

The note about how it has fallen off in Twitch’s game listings isn’t a big deal either. Blizzard gives out access to big streamers, who’s accounts they know, and many of them jump on and showed the game off. There were big streamers like Kripp and Towelliee, who streamed it a great deal for a while but don’t really play it anymore. There are still plenty of entertaining streamers who plan on keeping it in their rotations, Docgotgame (one of, if not THE, most entertaining and engaging streamers on Twitch), for example , during one of his last broadcasts, he seemed to suggest he won’t play it as heavily do to the fact it isn’t high on the Twitch viewership at the moment. The loss of Kripp and Towelliee alone though drops the game down a few notches. They have gone back to their regular games and other big actual releases like Diablo 3: Reaper of Souls. As I said, once the game actually goes Open Beta and Release, then I’m sure we’ll see many of the big streamers come back to it for a bit while others who’ve built a viewer base on the game will maintain the viewers once the big guys go back to their regular schedules. Again, the game is to early in its cycle to judge from Twitch viewership how the game will do.

Another note about the Twitch falloff, is that lots of the people watching when Kripp, and TotalBiscuit weren’t watching to see them play Heroes. They were just watching them no matter what they were going to play. You can’t say how the game lost 5k or 10k viewers when a couple streamers who have those numbers no matter what they play move on to other games for a short while. With no real marketing going on right now, most people aren’t aware of the game to seek it out when the big boys (and gals) aren’t playing it. I’m sure we’ll see some of them return to streaming it after each hype bump, and people continue to stream it now, if they can be entertaining and engaging enough, may end up building an audience during those spikes and retain them after Blizzard actually starts to do real public marketing of the game and raising the general gaming public’s interest in the game.

Also, the player pool is very small, the number of maps and hero pool are small, and easy to get bored right now. It is after all early alpha, and it is mostly a few very small waves of invites (we don’t know the size of the waves, but a blue post has said very small), a few select streamers, Blizzard employees and their family/friends (a small aside, I’d love to be one of your friends Blizzard, lol). Late in the closed beta there will be more people in and then they can make for a more entertaining stream.

I expect another huge hype wave after Blizzard shows the game off at Pax East (11-13 April 2014). I’d expect some more hero and possible map reveals, and hopefully a date or better idea on a time frame for the closed beta. A month or two after the start of closed beta we’ll have the same doom and gloom predictions start to surface all over again, just like Hearthstone. Come open beta that is when Blizzard will really start turning on the hype machine… and that’s an important point to note. Blizzard isn’t really trying to hype the game yet, they let it be known, they give it big exposure, but they haven’t actually turned on their marketing blitz yet. That won’t actually start until open beta, and goes full force upon release. Perhaps part of the problem is that the game is so polished right now, that even in early alpha it is, or so it seems from watching it as <*cough*> I don’t have access yet <*cough*>. Many of those who were and are streaming it have noted how well it plays and how it is better than most games are in beta. The problem is still in the end a player base that is too small, not all the heroes are in yet, though I’d expect a few more to be added to it during the Pax reveal (as a matter of fact, I’d expect that to be the biggest news from the show, and perhaps a date on the closed beta). Come open beta, I’d expect the discussions on the subreddit to flow well and the game to be in the top 10 or so of Twitch’s list. I doubt it will ever beat out League of Legends and DOTA 2, it might not even beat out Blizzard’s own Hearthstone, but it will find a large audience.

The hype among those who follow it closely may dwindle a bit for a time, especially for those of us who morn not being in the Alpha ourselves, and it will wax and wane a time or two before release, but the game is far from doomed. This isn’t Blizzard’s first rodeo. So relax people of the Heroes subreddit, official forums and others, the game will be fine. In fact, I’m sure it will do outstanding.

Now if only Blizzard would get me into the game per my open letter to Blizzard to get into Heroes of the Storm… 🙂 I’m not going to even try to say that I would be able to help build the hype much (I know my YouTube presence and this site are small fries to the big ones like Kripp, TB and the like), that getting me in would help boost Twitch viewership of the game much. It certainly wouldn’t hurt, and I’d think all one needs to do is spend a minute to activate an account (well, it might take a little longer, even with the info I provided in the open letter, but not much). But as I said, I don’t honestly think hype is Blizzard’s main goal… Feedback is, and I addressed that in my open letter as well.

EDIT (3 April 2014): Apparently HotS refers to Heart of the Swarm in Blizzard speak, so the proper abbreviation for Heroes of the Storm is just Heroes, so I changed the abbreviations.

EDIT (6 April 2014): I added a paragraph and moved a couple sentences from one to it’s own and a couple other minor edits.

You won’t be able to buy this game, it will be free to play on release, but you can play my current addiction Diablo 3

To use that, you’ll need the first D3 game, but there is a link there to buy both at a discount.