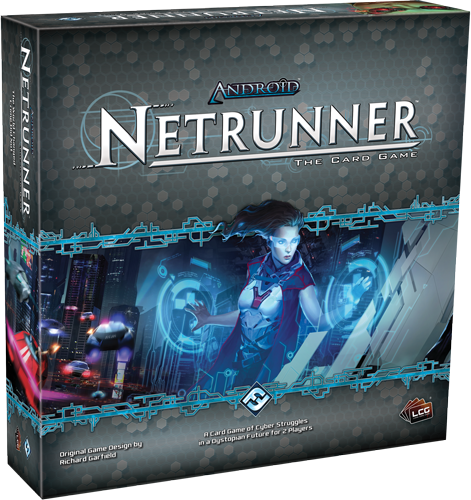 For people coming from a link to help, feel free to skip the intro, which is more for regular readers or those not familiar with Netrunner as much…

… I’ve played a couple times with Ari, but not any real serious games yet. I’ve listened to a couple of the Agenda 7 Podcast and a couple of the Breaking News Podcast, along with some of Team Covenant’s excellent video commentary series, and I’m ready to start playing some more serious games (if I can find people in my local area to play that is). I’ve got the following Data Packs (expansions for the game) so far, What Lies Ahead

and A Study in Static

, which are all there are at this point.

The challenge for me is that I’ve never played Magic: The Gathering, the original Netrunner game (on which this one is based), or any other games like it… my card game experience (beyond those using a regular deck of cards) is limited to games like Dominion

, both of which are far from the same category. So there is a heavy strategy element to learn, and that really requires people to play against to learn, but also deck building. Deck building is something new, and the question becomes what cards are important to have in a deck… For those who don’t know, the game has two sides, each side has several factions, with cards specifically for that faction, though you can put a few cards (“splash”) in from other factions (each identity in a given faction has a certain number of points it can take from cards outside it’s own faction, and each card has a certain point value that counts to that total unless it is a neutral card). Unlike MtG and the original Netrunner, this new game is a Living Card Game, meaning that each starter set and expansion pack have the same cards, so there is no chasing for a specific card, everyone has the same cards available to them if they got the same sets. You also don’t want to just blindly put in every card for your faction, you generally want to keep the deck you build close to the minimum (stated on each identity card) deck size so that it improves the odds of getting the cards you want (and you can only have a certain number of each card, generally 3 though there are several exceptions to that rule).

There is a question on sleeves… to sleeve everything or just the active decks. At the moment I’m using the Ultra-Pro Deck Protectors with solid colors sold in packs of 50 at Walmart (I use Blue and Red for my Netrunner decks, not sure what I will use for Star Wars: The Card Game

… perhaps Black and Blue, though that may lead to deck confusion)… I would prefer Dragon Shields

(that’s to the blue ones, but I’d stick to blue and red), but they seem far pricier… Anyhow, sleeving all cards, even with the Ultra-Pro’s from Walmart eventually gets pricey, but not sleeving them all makes it time consuming to prep a new deck. So I wonder what do most people do?

So the question then becomes how to build a deck, what are the motivations behind each identity, and what cards are must haves.

I am not looking full deck builds (though if people want to link to good decks for new players to use, and explain the motivation and ideas of the deck, feel free, but just linking to a deck doesn’t help if I don’t understand the why/how of the deck…and I’ve got all the expansions to date), but the basics of what should I be thinking about when building a deck.